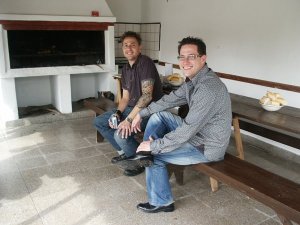 Last weekend we had two sets of visitors. Elvi came down on Saturday afternoon from Buenos Aires with her sister, Jacqui. On Sunday we were joined by my brother, Kevin Stuart, and his friend Tom Henriksen. Kevin and Tom both live in Los Angeles and have been friends since junior high (i.e., a long time). They’d arrived in Buenos Aires a few days earlier and had already experienced more night life and urban excitement than is even possible down here in tranquil City Bell. Kevin delivered MANY paperback books that I’d ordered for the kids, enough to keep up with their voracious reading habits until we leave, and then after a delicious asado we took off for the airport. Destination: Mendoza, a city on the western edge of the country, up next to the Andes. Mendoza is the center of Argentina’s wine production, with about 70% of the grapes grown in the province. Kevin’s a wine distributor and was interested in seeing what the Argentine fuss was all about. Tom and I were only too happy to accompany him on the journey. And as the kids said, mom was in need of “recharging her batteries.”

This entry was posted in family and friends. Bookmark the permalink.